The Waimea Inlet is the area inside a line connecting the Tasman Bay shoreline of Mapua, Moturoa Rabbit Island and Tahunanui Beach. 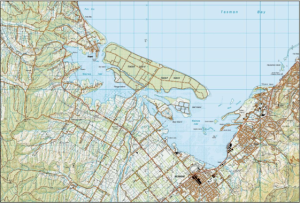 It is the largest enclosed estuary in the South Island, at 3,455 hectares in area. It has an internal coastline of 65 kilometres between Tahunanui and Mapua. In a geological time-frame, it is a recent and changing feature. There are ten islands in the inlet, with Rabbit Island forming an outer barrier that influences river and tide flows and sediment distribution. The Waimea River is the major freshwater inflow to the inlet, and there are numerous small coastal catchments in the east and west.

The inlet is a large open space beside fast-growing urban centres. It is a dominant landscape feature at the head of Tasman Bay, when seen both at the water’s edge and from higher ground.

The inlet is of international importance for migratory bird species and is of national significance for other endangered or threatened species. These include birds such as bar-tailed godwit, white heron, Caspian and black-fronted terns, variable oystercatcher, Australasian bittern, and banded rail, and plants such as coastal peppercress and grey salt bush.

The inlet is important to life-cycle stages of fish species, which are dependent on the continuity and sequence of habitats from the streams, through the inlet, and to Tasman Bay, being maintained.

People began to use the inlet some 500 years ago. Permanent occupation was possible through the range of resources available. An ethic of kaitaikitanga, or stewardship, governed the use of fish, shellfish, birds and plants for food; trees and other plants for shelter, waka, and clothing; freshwater; and improving soil productivity.

With the arrival of European settlers the inlet provided the principal access to the Waimea Plains and Moutere Hills, a source of fish and waterfowl, and its margins provided flat land for development.

The inlet is now surrounded by urban and peri-urban development. The urban areas of Nelson and Richmond lie on its eastern side, with a combined population of 55,000 people. On the western side lies Mapua. Between the two is a mixture of productive land and lifestyle blocks with a number of small localities and communities.

The 22 rivers and streams draining into the inlet once passed through freshwater wetlands fringed by indigenous forest. They now drain residential, industrial and rural catchments, and are modified to varying degrees with channel realignments and loss of original vegetation and habitats. They carry nutrients, sediment and contaminants to the inlet and the ocean beyond, without the filtering benefit of the former wetlands in the lower catchment.

The margins of the inlet, once in native wetland, eel grass and other inter-tidal and shoreline vegetation, have been extensively modified. Changes include the construction of roads, tide banks, and drainage systems. Adjoining land has been cleared for agriculture, and developed for residential and industrial uses. Strategic assets such as roads, power lines, pipelines, airport, and sewage treatment plant, are also located beside or in the inlet.

The scale of the inlet gives places with qualities of peace, quiet and space, which deserve to endure. These provide the opportunity for solitude and contemplation by some, and shared experiences for others.

The inlet and its margins are used for a wide variety of recreation uses ranging from active sports, such as walking, cycling, boating, bird watching, dog walking, horse riding, game bird hunting, fishing; to picnics and social gatherings. There are potential tensions between some of these uses, but most are compatible if undertaken in appropriate places or at appropriate times.

The inlet extends across both the Tasman District and Nelson City coastal marine areas and contributing catchments. During recent years the Tasman and Nelson communities have raised concerns about the state of the inlet and conflicting values in and around it. They have asked their Councils to provide for active management of the inlet, particularly for protection and enhancement of its natural values, and for opportunities for the community to participate its management.

A summary of the natural features and condition of the Inlet can be viewed in a StoryMap using this link:

The Inlet is of international importance for migratory bird species and is of national significance for other endangered or threatened bird species.

The Ramsar Wetland Convention says that a wetland should be considered internationally important if it regularly supports 1% of the individuals in a population of one species or subspecies of waterbird. According to this criterion, Waimea Inlet is of international importance for:

Tasman Bay is the most important site in the world for Variable Oystercatcher. It is home for a breeding population and a ‘creche’ for juveniles/sub-adults.

With special thanks to Tasman District Council

The Waimea Inlet Forum was created as a result of the Waimea Inlet Management Strategy, and joins together the Tasman and Nelson councils, the Department of Conservation, and other statutory and non-statutory groups and organisations, businesses and residents who have an interest in and a commitment to the Waimea Inlet and its sustainable future.

We acknowledge the organisational and administrative support of the Tasman District Council which enables the Forum to do our work.